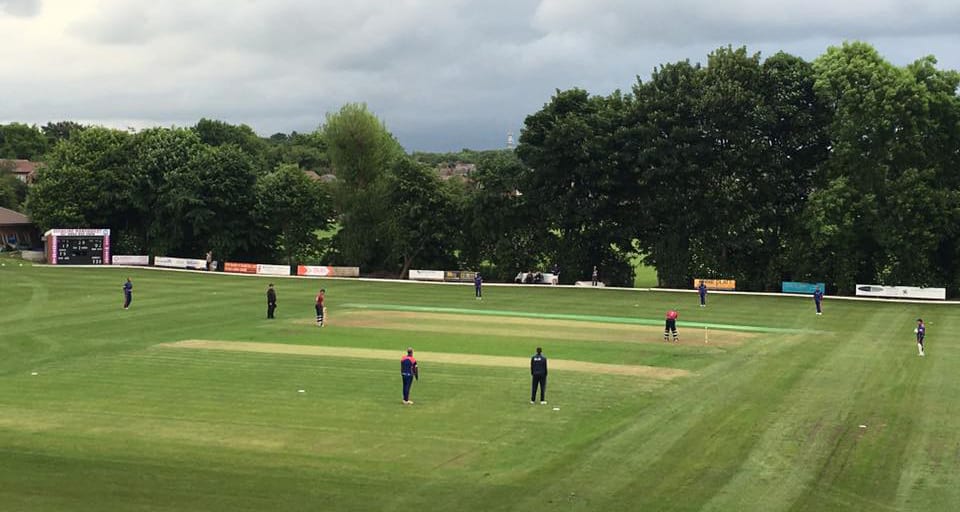 The start of the 2016 Cricket season marked the beginning of a new era in local cricket. The Greater Manchester Cricket League, which had been in the planning for several years, finally became a reality. The new League combined Clubs from several local leagues including the prestigious Central Lancashire League.

Prestwich 1st XI had been placed in the Premier Division with the 2nd XI in the 3rd Division and the 3rd XI playing in Division 5 South and East. All Prestwich’s Junior teams played in the new League also.

There was an inauspicious start to the season as poor Winter and early Spring weather forced the League to cancel the first game of the season. The poor weather had affected Prestwich’s ground badly as work due to be carried out by contractors could not be completed and the ground’s drainage system was unable to cope with the volume of rain.

For the first 3 weeks of the season Prestwich teams had to play their ‘Home’ games on other grounds. We were extremely grateful to those Clubs which played host to our teams for their help at this difficult time.

Eventually, due largely to the sterling efforts of Brian Lorenzini and his team who put in a lot of time-consuming and often thankless hard work, the ground was deemed fit to play on. The Section owes a huge debt of gratitude to this band of volunteers.

The season was a very successful one for Prestwich although tinged with disappointment. The 1st XI missed out on the inaugural Premier Division title on the last day of the season in a nail-biter of a game against Egerton who claimed the title by defeating Prestwich. The 2nd XI went one better to become Champions of their Division, also in a nail-biting final game. As a result of this triumph the 2nd XI won promotion to Division 2 in which they will face many 1st XIs which will be a challenge but one which the 2nd XI are more than capable of dealing with. The 3rd XI, as usual, bore the brunt of team changes leading to a less successful year. However the 3rd XI’s role in introducing our promising junior players to Senior cricket is invaluable for the future of the Club.

The first GMCL Presentation was held at the AJ Bell Stadium with the Juniors in the afternoon and the Seniors in the evening. Prestwich featured heavily in the proceedings. In addition to the 2nd XI team award to pick up Tom Gibson won the Premiership Fielding award and Lewis Smith bagged the Division 3 Batting and Fielding awards. Nick Carter won the Division 3 Bowling Medal and Nathan Bailey, Finley Wood, Max Rogers and Luca White claimed prizes at Junior level.

Marty Walters joined us again as professional and had a very successful season and it was planned that he would return in 2017. However, changes in the running of South African cricket have resulted in Marty deciding to give up cricket and look for another career. Consequently the Senior Cricket Director and other members of the Committee had to hurriedly find a replacement professional. They have succeeded in their quest and we will have another South African joining us for the coming season. Marty will be greatly missed, both on and off the field.

During the 2016 season the sponsors of the GMCL, Greene King Brewery, approached Prestwich to host a game against the Professional Cricketers Association which consists of former County and International cricketers. On the day, we were blessed with fine weather. Nick Connor, our caterer, provided a lovely lunch and all the Prestwich players and guests enjoyed the company and competition of the PCA players.

2017 sees changes in the running of the Cricket Section. Succession planning has led to an overhaul of the composition of the Committee and the way in which responsibilities are split between members of that Committee.

At the end of the coming season the contractors will complete the work on the ground which has so far seen a myriad of new drains installed.

As mentioned earlier in this report thanks must go to Brian and his team for their ongoing commitment to taking care of the ground and surrounds. Also thanks go to the scorers and those members who donned the white coat to officiate when the League was unable to provide Umpires and, of course, to the loyal band of ladies who give up their weekends to provide match day refreshments. Also the contribution of the coaches and volunteer helpers must be acknowledged.

Finally, in 2016 we lost some dear friends and loved ones. Sarah Taylor (daughter and sister of former players Bill and Andrew Taylor), Peter Rogers, Ken Morgan and Rowland Barnacott. We will miss them all.

So now we look forward to warmer weather and our second season in the GMCL. Good luck to all our players and supporters.