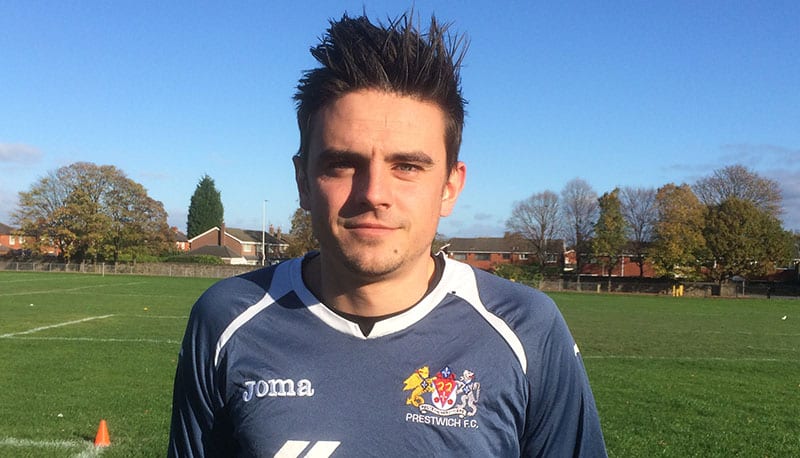 Prestwich showed great character to come from behind and against a Radcliffe side fighting for survival in the LAL 1st division.

Whilst Prestwich started well dominating possession on what was a horrendous Manchester Rd playing surface, Radcliffe who’d put in a spirited performance against Roach the previous week were well organised defensively and looked dangerous on the break.

Radcliffe’s game plan appeared to be working, Prestwich were being restricted to half chances and they offered a real threat on the break in the form of veteran striker Jason Jarret him having made 296 professional league appearances for Wigan and Bury amongst others.

As Prestwich pushed on in search of the lead they left themselves more and more vulnerable to the counter and it told on 15 minutes when a clearance found Jarret who’s run into the box was stopped by what appeared to be a terrific tackle by Richard Steadman but the ref adjudged that contact was made with the player before the ball and Jarret despatched the ensuing penalty.

Having had a shock defeat to Failsworth last time out there was a real fear that Prestwich would buckle but to their credit the whole side just dug in and upped the ante in an all-out assault on the Radcliffe goal.

The usual suspects Steve Murty, Mike Neary and Martin Hill started to get at an ever retreating Radcliffe defence at every opportunity, showing incredible skill and poise on the lumpy playing surface.

Real chances started to come, Hill missed a close range header from a Murty cross, Kieran Comisky followed up with a similar headed miss, then on 20 mins Sam Holden won possession some 30 yards out and made a great run into the left hand edge of the box before squaring to Sean Haslam who slotted home clinically.

The rest of the half was filled with the usual liturgy off missed chances that could easily have seen the lads go into the interval with a five goal lead but as it was two more goals followed, first Neary on 20 mins with a run in from the left and sweet 20 yard strike, then Hill from similar range on 40 mins after a lovely move instigated by Liam Burke on the left.

The second half was all about managing the game out, Prestwich remained in the ascendency but the worsening conditions made it very difficult to play with the fluency that we are used to from this side and moves were frequently broken up by an awkward bounce and shots frequently skewed wide for the same reason.

Radcliffe to their credit never gave up and continued to be a threat on the break but Steadman and Paul Taylor managed to control Jarrett’s threat and the biggest scare was thwarted by great tackle by right back Chris Adams who had a fine game in his first start for the club.

Coming on the back of the shock defeat It was good solid performance, especially so as Prestwich were missing tree key players on the day.

Next week brings a mouth-watering fixture against title and promotion rivals Roach Dynamos, it promises to be a great game at Hopwood.