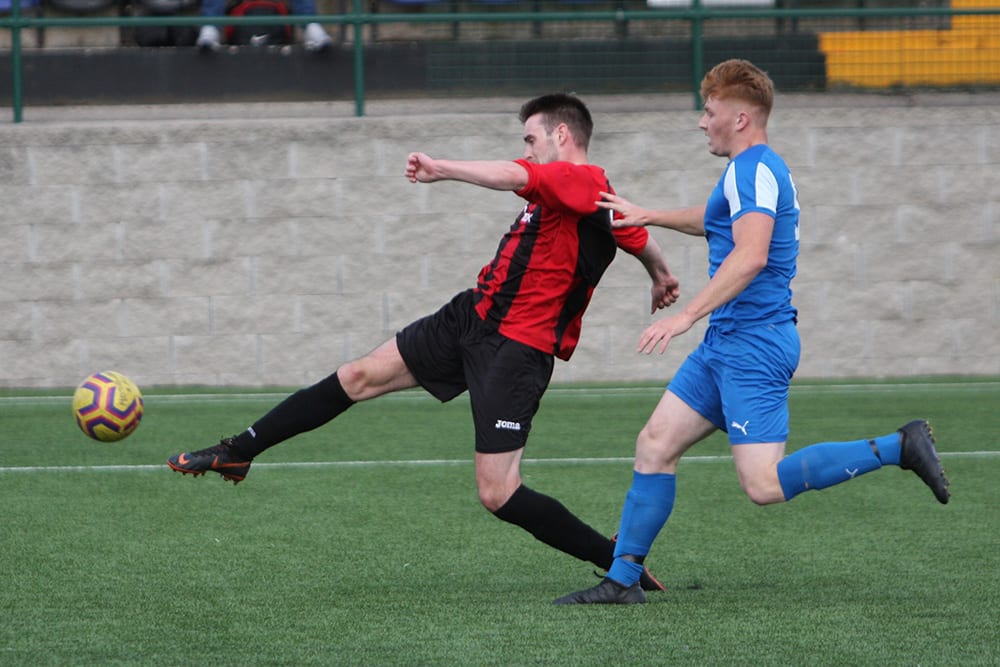 Prestwich began their 2019/20 campaign with a very tough visit to last season’s Runners Up Mostonians at the Vestacare Stadium in Hollinwood.

The game was played at a very fast pace from the off with Prestwich generally having the best of the possession. Playing some slick inter passing moves they were rewarded on 5 minutes when Callum Pragnall was found free on the right hand side of the box and he unleashed a wicked shot that flashed into the roof of the net.

The game continued with Prestwich fashioning the best of the chances and Mostonians working hard but finding it tough to make an impression on the Prestwich defence, Michael Hudson remaining relatively untroubled in the Prestwich goal.

Prestwich should have had further goals, Sean Haslam driving wide of the post having been put through on goal, Simon Gallanders having an effort well saved when put through and Haslam firing across goal from an acute angle after getting free on the right. These the best of a host of half chances and good positions that did not result in further reward.

The game continued at a fast pace Mostonians creating a handful of half chances but little on target.

Finally Prestwich got the reward their alround excellent play deserved when Haslam again got through on goal and this time despite a defenders desperate attempt to block his shot it found the net for a welcome second in the 41st minute.

A slightly slower start to the second half by Prestwich saw Mostonians gain a foothold in the game and began to exert some pressure on the Prestwich back four but did not really create a serious chance.

With the midfield working very hard to win the ball when lost Prestwich still posed a major threat and Haslam twice shot just wide when breaking down the right.

In the 67 minute Rafael Straszewski replaced a tiring Gallanders and within minutes fizzed a shot from the edge of the box just wide.

Mostonians now getting desperate to get into the match put on 2 subs of their own and the extra energy culminated in a lifeline on 75 minutes when a forward produced an acrobatic effort from a cross to power a shot past Hudson.

This pepped up the home side and they pushed forward in search of an equaliser, but the Prestwich defence stood strong and they were limited to half chances from distance.

Still posing a threat and pushing forward at every opportunity Prestwich restored their two goal cushion with a sublime finish from the edge of the box by Tito Miguel who steered his shot round defenders and into the bottom right hand corner of the net.

To their credit Mostonians never gave up and kept pushing forward to the end, their greater experience perhaps telling on a tiring Prestwich side when a shot was curled into Hudsons right hand corner from the edge of the box with the very last kick of the game. The referee blowing for time a second or two after the ball hit the net gave the score line a somewhat lopsided feel as a more comfortable win would not have flattered a very impressive overall Prestwich performance.

Next up for Prestwich is a home game v Thornleigh FC on Wednesday 21st August, KO 18.30 at Adie Moran Park (Prestwich Heys FC) where the clubhouse will be open with a bar, hot drinks and snacks available.

Come along and support the lads, admission to the ground is free. We hope to see you there.