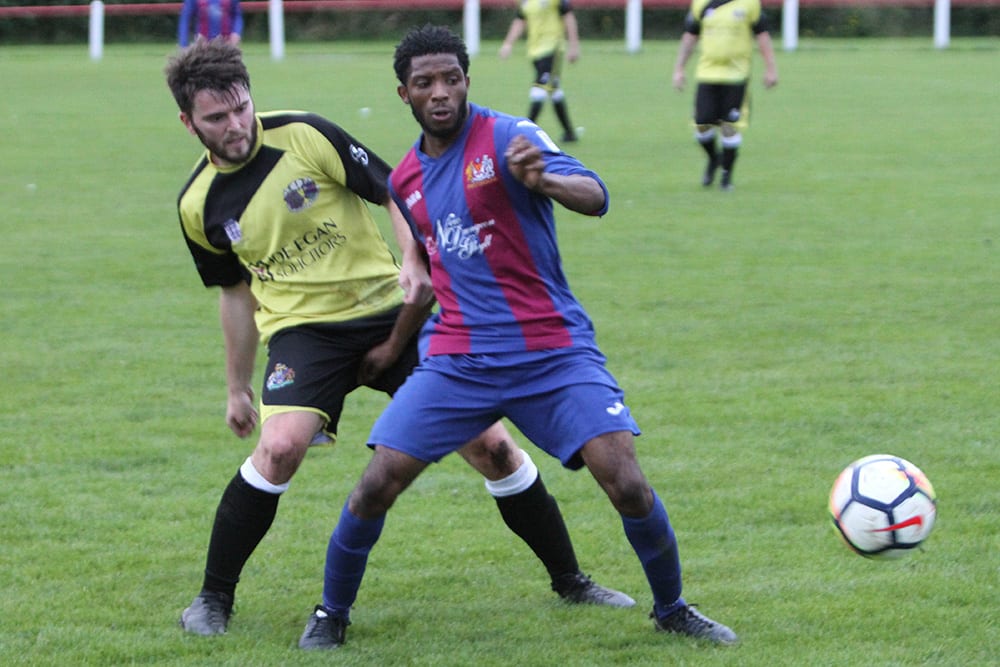 Prestwich FC commenced their new ground share with Prestwich Heys at Adie Moran Park with an emphatic victory over Thornleigh FC and now find themselves leading the Premier Division from Whitworth Valley on goal difference.

Prestwich started the game at a high tempo and pressed their opponents into their own half for much of the opening period, creating several good chances which were scorned.

Ultimately their pressure told when a right wing move between Mike Neary and Sean Haslam culminated in Haslam crossing for Callum Pragnell to apply an easy finish.

The pattern of the game continued in broadly the same vein, Thornleigh restricted to occasional forays into the Prestwich box and being placed under serious pressure in their own half.

Prestwich extended their lead on 35 minutes when Haslam latched onto a deflected effort to slide in a smart finish, probably harder than two earlier efforts put wide.

Pragnell also brought a top class save from the Thornleigh keeper as the half wore on and despite one scare at the other end when Nathan Williams mishandled a corner and the loose ball was hit against a defender and cleared, Prestwich were very good value for their half time 2-0 lead.

The second half started with the same overall pattern and Prestwich playing some delightful football at times. Thornleigh were restricted to a small number of half chances but never posed a serious threat to the well martialled Prestwich defence with Richard Steadman particularly outstanding.

Another flowing move on 55 minutes brought the third Prestwich goal when again Neary and Haslam combined to set up Matthew Brennan for a tap in. This hearalded the introduction of Kieran Comiskey to replace Sam Smith in midfield adding to the earlier switch of Tito Miguel for Rafael Straszewski at half time.

Shortly after Haslam shot wide after a further break down the right and Neary brought a great save out of the keeper minutes later.

The mercurial Miguel was causing all sorts of trouble for the Thornleigh defence and all awaited the award of a penalty when he was caught on his way through on goal but play was allowed to go on, the referee later saying he had dived.

Further chances came and went but eventually Miguel got the goal he deserved when he was found out on the left by Pragnell, he rounded a defender and guided his shot into the far corner for 4–0 on 70 minutes.

Five minutes later Williams made his one save of the match turning round the post a shot heading for the bottom corner of his net.

There was still time for a further penalty appeal when Neary appeared to be brought down from behind when in on goal, only for the referee to again wave play on saying the defender had stood his ground.

There were no more serious chances and Prestwich ran out comfortable winners with another impressive performance which could have produced a much more representative score line with more clinical finishing.

There is no game for Prestwich this weekend Saturday 24/08/19.