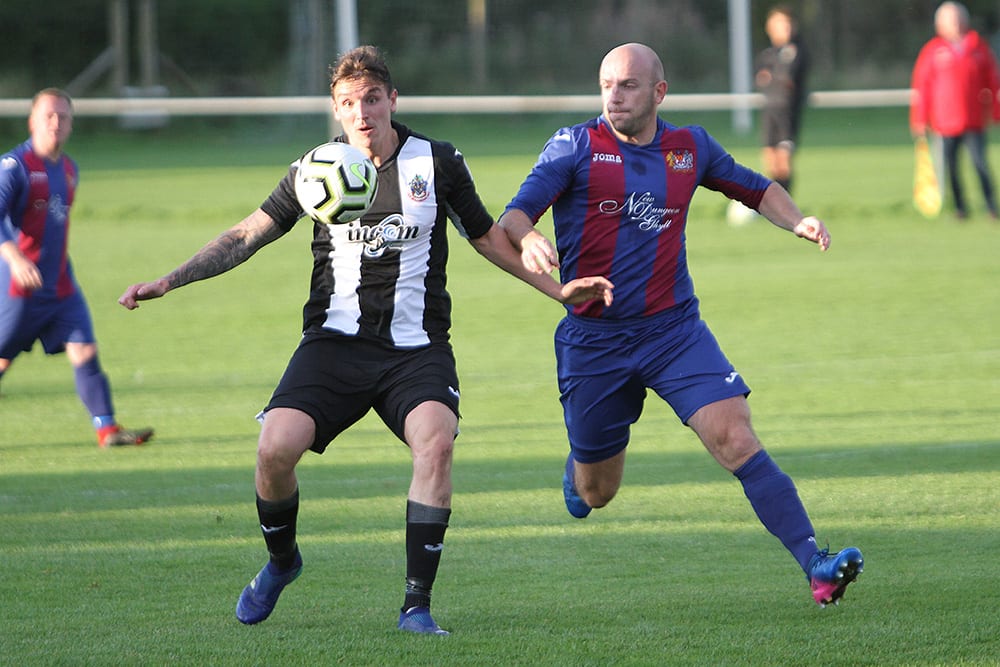 Prestwich came a close second in the first of two extremely tough away matches against two of this seasons early front runners, who also finished in the top four last time round.

The game was played at a high tempo throughout and Prestwich perhaps had slightly the better of the opening exchanges.

The visitors took the lead in the 10th minute following a misplaced pass by a Bolts defender which landed at the feet of Stefan Rapacz who went on a forceful run into the box and slotted in the opening goal with ease.

Bolts responded immediately and were level on 12 minutes when scoring with a header from a corner.

Things got worse for Prestwich a minute later when a flowing move ended with a half blocked shot finding its way into the bottom corner of Mike Hudson’s net.

The game ebbed and flowed with both teams having periods of ascendency and half chances but neither able to make anything count.

The fluency of Prestwich in earlier games being hampered by an inability to keep the ball on too many occasions and thereby surrendering a sequence of good positions and loosing possession.

The second half saw Prestwich introducing Rafael Straszewski for the injured Callum Pragnell who had a tight hamstring.

Bolts started the half very strongly, taking advantage of the Prestwich reshuffle and almost extended their lead after a period of pressure culminated in a cross shot from the left side of the box hitting a post before being cleared by the Prestwich defence.

A period of tit for tat followed before Prestwich made a strong push to get an equaliser with several half chances going wide or being easily saved.

Their efforts were rewarded in the 70th minute when Sam Smith was fouled on the edge of the box before he picked himself up to guide home a superb free kick that gave the keeper no chance to save.

This prompted a further surge from Bolts who started to exert pressure on the Prestwich defence but were limited to fairly long range efforts off target or dealt with by keeper Hudson.

In the 76th minute however disaster struck with yet another well struck long range effort that Hudson slightly misjudged and it looped onto the bar, hit him on the shoulder and dropped into the net for what turned out to be the winner.

Prestwich responded by pushing forward and Mike Neary brought a good save from the Bolts keeper with a stinging left foot shot after weaving his way into the area.

Further pressure brought a string of corners and free kicks that came to nought but Prestwich felt they should have had a penalty when Sean Haslam was felled on the 6 yard box when poised to shoot.

Bolts had a couple of chances to extend their lead with Prestwich pushing for an equaliser but that would perhaps have been unkind on them had it occurred.

Next up for Prestwich is a tough trip to face last season’s double winners Whitworth Valley at Rawstron Street OL12 8BA on Saturday 31st August with a 2.30pm KO.