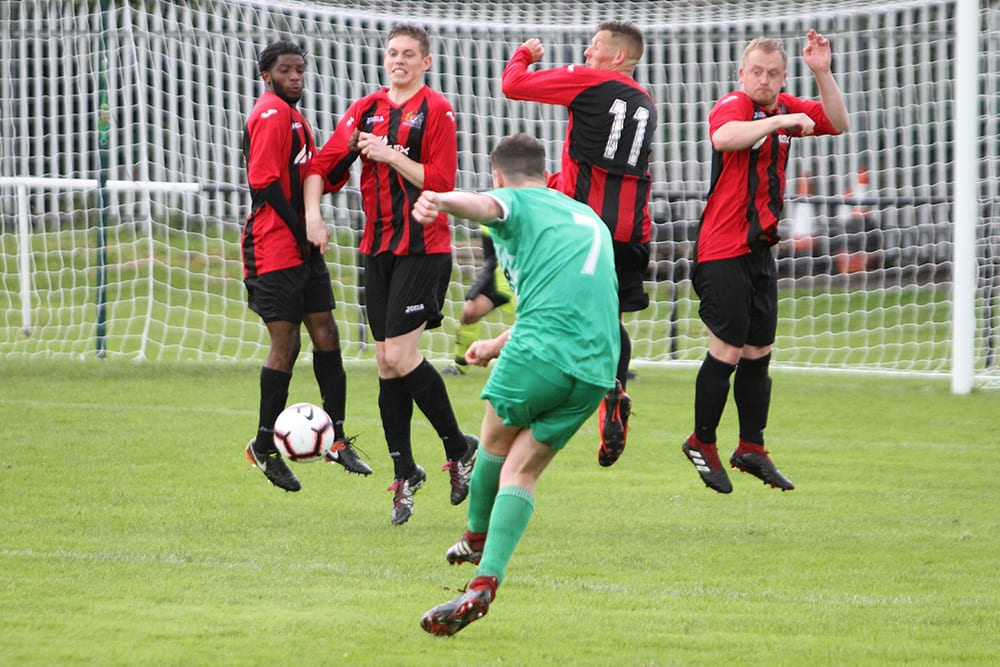 This match was the second tough away game in four days for Prestwich and as is usual against Whitworth they were very much second best against last season’s double winners.

However things were not helped by the absence of a string of players resulting in only 12 available, with sub Dillan White helping out too early, as it turned out, returning after a shoulder injury.

In fact White was called upon in the 5th minute when Barrie Campbell limped off with a tight hamstring, the result of trying to play 2 games in less than 3 days in his late thirties.

This prompted a reshuffle and it took a while for Prestwich to settle, Whitworth taking advantage to exert a lot of pressure and create a glut of chances that came to nothing.

Prestwich were working very hard to get in the game and did have a few half chances that were snuffed out by a very quick and mobile Whitworth defence.

Much of the half saw Whitworth in the ascendency and they got their reward in the 38th minute when a cross from the right was met by an unchallenged forward who guided his header into the top corner.

Things immediately got worse for Prestwich when in the 40th minute another attack resulted in the ball reaching the supporting left back in space and he rifled a left foot shot from 25 yards which flew past Mike Hudson in the Prestwich goal.

Prestwich saw out the rest of the half without further punishment but it was clear that White was struggling to contribute effectively despite his best efforts.

The second half continued in the same vein with Whitworth pushing forward to kill the game and after a period of pressure Prestwich gave the ball away on the edge of their box in the 57th minute and Whitworth capitalised and notched their third and final goal.

This prompted the removal of White who was clearly in pain and Prestwich finished the last 35 minutes with 10 men.

Despite the numerical disadvantage Prestwich continued to play their passing game and did carve out a few chances with Tito Miguel and Sean Haslam taking long range efforts that did not test the keeper but kept Whitworth on their mettle in case Prestwich got back in the game.

Prestwich defended stoutly and denied them any further goals despite several close calls and some good saves by Hudson.

Steve Lorenzini’s men can take a deal of credit for the effort on display and the attractive passing football that they exhibit whenever they can, but today was not their day against a very good and hard working side.

Next up is Chaddertonians FC at Adie Moran Park M45 8WG with a 2.30pm KO. It is hoped the Prestwich Heys clubhouse will be open with hot drinks, snacks and a licensed bar.