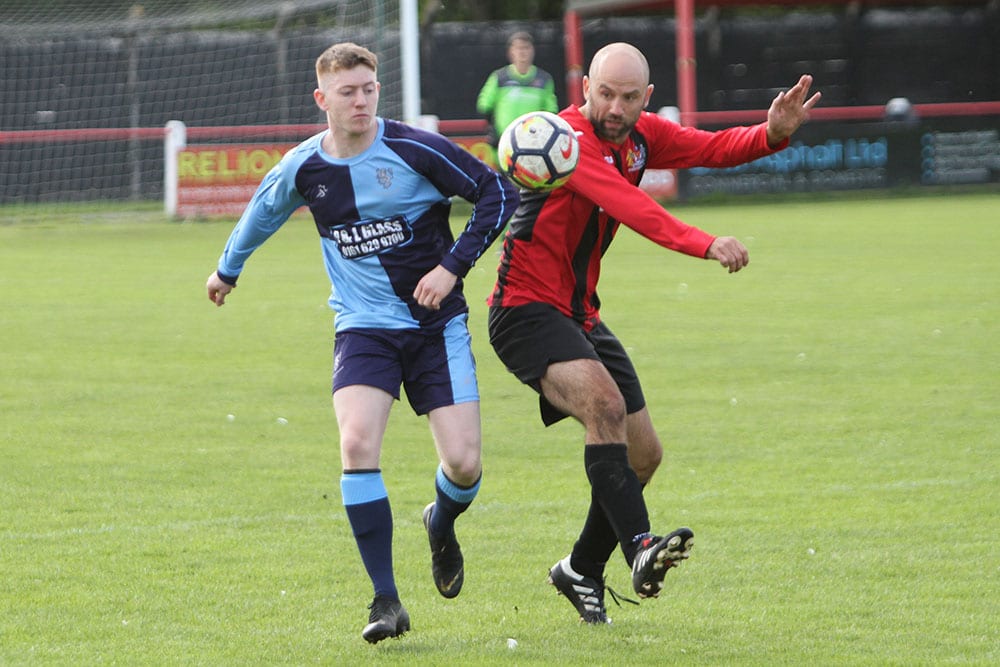 Prestwich’s return to Adie Moran Park for their second home game was less than a truly happy one as they squandered a host of chances in a game they dominated but could have lost in the final minutes.

Fielding a full 14 man squad this week the portents were looking good but it did not turn out that way.

Chaddertonians started the game at a high tempo and in an end to end opening had slightly the better of the game and with their first shot on target took the lead in the 8th minute when a shot from the edge of the box squeezed under Mike Hudson’s body and trickled into the net.

Prestwich responded well and for much of the rest of the half exerted a great deal of pressure on the Chadds back line.

A right wing move between Martin Hill and Sean Haslam saw the keeper make a fine save from Haslam’s shot which was on its way into the top corner. Shortly after another right wing foray with Hill and Mike Neary linking well saw Neary in on goal but he steered his shot wide of the target.

After 20 minutes Steve Lorenzini took himself off and brought on James Barlow at left back.

A succession of corners and free kicks followed but all came to nothing as the pressure built, with Chadds limited to the occasional break and a couple of corners but posing no further threat to the score line.

At the other end a series of comfortable saves by the keeper and off target efforts were all that Prestwich could muster despite dominating most of the play and creating some good opportunities and having a great deal of possession in the final third.

The second half continued in much the same vein with Prestwich pushing forward in search of the equaliser and it became almost one way traffic but again chances were missed, good positions wasted and the keeper kept his team in the game when efforts were on target.

Another series of corners for Prestwich saw Barrie Campbell produce some good headers which narrowly missed the target but one bringing a great save at the near post and later when the ball fell to him in the box a delicate chip was flicked over the bar by the keeper with an instinctive save.

A further corner resulted in an attempted clearance coming off the bar and it seemed that Prestwich were destined not to score.

Then in the 71st minute a corner was given and Chadds were reduced to 10 men when an over exuberant protest resulted in a defender being sin binned. From the corner Campbell rose highest to plant a downward header into the bottom corner for 1-1 and some relief for Lorenzini’s men.

They continued to press for the winner and were further assisted when minutes later a second Chadds player was sin binned for speaking out of turn but Prestwich were unable to make the numerical advantage count despite several good chances being created.

There could even have been a sting in the tail, as when back to 11 men in the last 5 minutes, Chadds themselves pushed forward and in the 87th minute rattled a post and a minute later had a good effort fly over the bar.

However the game ended all square which was the least Prestwich deserved. Credit goes to Chadds for some stoic defending and their keeper for his saves but Prestwich must become more clinical in front of goal and make better decisions when in the final third.

Next up for Prestwich is a trip to face Southport Trinity of the Mid Lancs League in the LFA Amateur Cup 1st Round on the 14th September, the match taking place at Devonshire Road Playing Fields, PR9 7BZ with a 2.00pm KO. Any support for such a long trip would be extremely welcome.