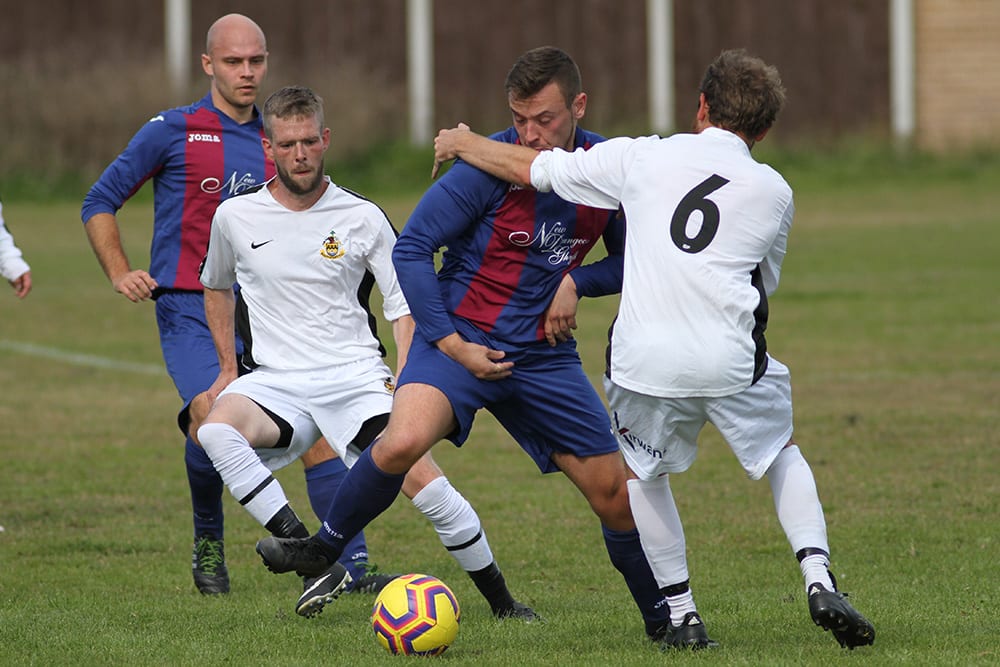 The first round of the Lancashire Amateur Cup saw Steve Lorenzini’s men making the long trip to Southport with a 12 man squad following a host of unavailability issues.

The fact that they came away with a victory was testament to the spirit and work ethic within the squad in what was a topsy turvy game on a very difficult uneven pitch which made neat passing football hard to achieve.

The game was played at a fast pace with Prestwich trying hard to play their normal game and Trinity utilising the conditions better with quick forwards getting in behind the Prestwich defence chasing long balls.

There were chances at both ends and Prestwich were perhaps a little lucky that several Trinity players scorned decent opportunities and Alex Blake standing in for Mike Hudson made a couple of important saves.

At the other end Sean Haslam missed a good chance and Sam Smith brought a full length save from the Trinity keeper to keep his 20 yard effort out of the bottom corner. Haslam later saw a fierce drive just clear the crossbar and Callum Pragnell dragged a shot wide.

Trinity then took the lead when another long ball bounced over James Barlow and a forward hit the falling ball from 25 yards and it sailed over Blake into the top corner for a goal he is unlikely to ever repeat.

Prestwich pushed on for an equaliser but the game was essentially end to end and again chances were created and missed at both ends.

As the half neared its end Prestwich got back into the game with two quick fire goals, firstly in the 44th minute a shot was parried by the Trinity keeper and Matthew Brennan got his head on the rebound for 1 – 1. Then in the second minute of added time a foray down the left wing saw Barlow fire in a terrific low cross that the keeper could not hold and Pragnell stabbed home the second to give Prestwich a welcome lead at half time.

The second half followed in the same manner with both sides pressing forward, both keepers called upon to make saves and chances going begging.

Trinity were desperate to get back in the game and did so on 55 minutes when a ball into the box was not dealt with by the Prestwich defence and it was scrambled in for 2 – 2.

Back came Prestwich and put the Trinity goal under some pressure with a series of corners culminating on 60 minutes in a third goal when an excellent Haslam corner evaded everybody to fall at the feet of Lorenzini who calmly controlled the ball and lashed a fierce left foot half volley into the net for an important lead.

As the game got more stretched with Trinity pushing forward for an equaliser Prestwich were getting more space up front and with the defence standing firm they were able to increase their lead in the 69th minute when a neat move saw the ball find Pragnell in the box and he steered his shot wide of the keeper to give Prestwich an element of comfort.

At this point Kieran McGlade, making his debut, replaced Craig French who had a sore knee.

This prompted a reshuffle with McGlade joining Haslam up top but after a promising 10 minutes he hobbled off with a knee problem and French had to return and see out the rest of the game.

Shortly after another long ball caused problems for the Prestwich defence, Blake came out of his net to try to cover the situation but Trinity’s best player on the day did extremely well to turn and place a 20 yard effort into the unguarded net.

This left a testing last 10 minutes as Trinity stretched every sinew to force an equaliser but it was Prestwich who came closest when a break saw Martin Hill and Haslam work a one two and Hill fired in a shot that was brilliantly saved by the keeper.

Prestwich were able to control the game in the last few minutes and full credit must go to the makeshift back four of Dillan White, Stefan Rapacz, Barlow and French with assistance from Lorenzini and Blake for providing the foundation for the win in a game which saw several positional changes at the back. Also credit to all the other players who to a man put in a full shift and more to secure the victory.

At present the next scheduled game is at Adie Moran Park on 28/09/19 when Bolton Wyresdale are due to visit for a 2.30pm KO. However this may change as the LAL are planning to run the 1st XI League cup on that date so please keep an eye on the website for any fixture updates.