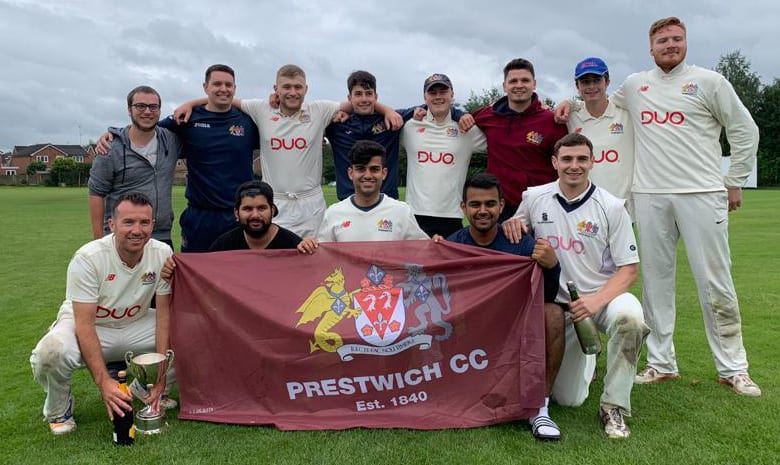 Prestwich 2nd team have gained promotion to division one of the GMCL – a quite remarkable achievement.

Already in a division where most other sides are first teams equipped with a professional, they will now move up a rung solely amongst the ranks of higher-standing first teams.

Their fourth-placed finish is tantamount to a winning a trophy itself, and combined with winning the 2nd XI Cup, heralds an outstanding season for the team, led by Captain Peter Lorenzini and vice captain Adam Taylor.

Saturday’s plucky victory over East Lancs Paper Mill 1sts fittingly summed up the blend of youth and experience which has made this possible. Firstly, Lewis Jarvis’s superb 7 for 35 from his 15-over spell was the catalyst for East Lancs being dismissed for 85. Then, in the face of some excellent East Lancs bowling, it was one of the younger emerging talents, Josh Ahern, who held his nerve, making 21 not out to clinch victory by 3 wickets.

The first team rounded off their season on a high with a six-wicket victory at Monton, giving them a fourth-placed finish in the Premier division.

Monton set a total of 146, out of which their pro Ashar Zaidi made 71. Ali Azmat took 4 for 33, and Ryan Stanbury 3-11. In reply, Azmat struck 56 and 40 not out from skipper Sam Holden – pushing him to around 550 runs for the season – secured a comfortable victory.

On Sunday, the 3rd team’s clash with Greenmount 3rds turned into a war of attrition in an enthralling game, despite the very low scores. Greenmount were routed for 47 with excellent bowling figures all round: Uwais Khaliq 3-3, Umar Arif 2-5, Anees Arif 2-7 and Muhammad Arif 2-10.

Prestwich found runs equally hard to come by – youngster Matthew Wood (3-11) was particularly impressive – and it was left to skipper Karl West (14 not out) to get his team over the line.

It means the 3rds still retain an outside chance of the Sunday Premier Division league title, with their final games away from home this Saturday against Clifton 3rds, and at Bolton Deane & Derby on Sunday.