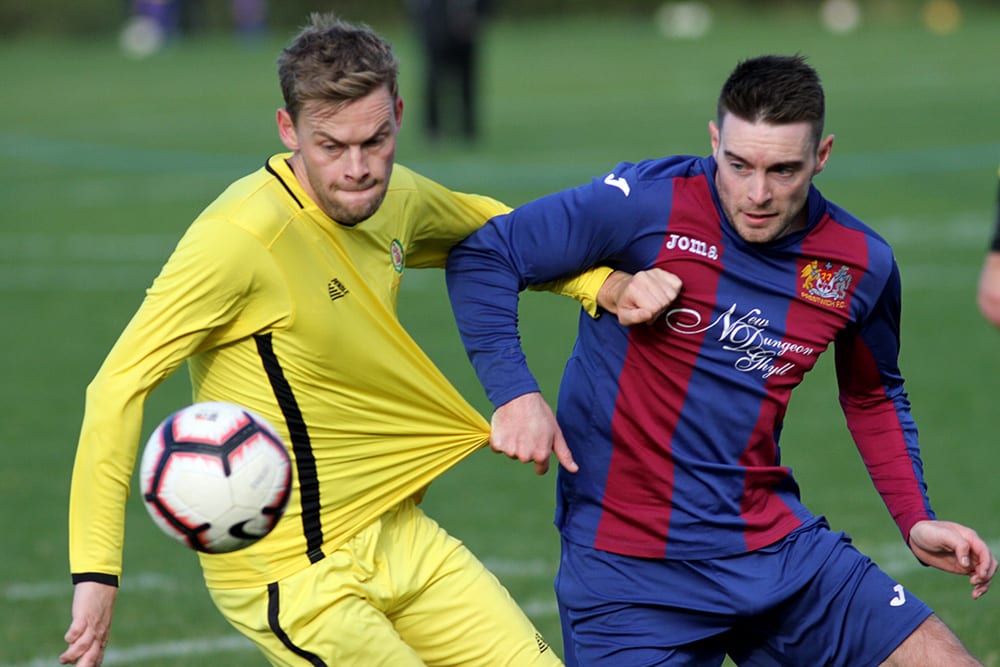 Prestwich put in a convincing performance on their return to league action and recorded their first win over Old Blacks in eight games.

The pitch was in good condition despite all the recent rain and although a little small allowed a passing game when the ball was controlled.

During an opening few minutes that had little controlled play, Prestwich should have taken the lead when Sean Haslam was released down the right, he provided a perfect cross to the advancing Michael Neary who, with a defender in attendance, fluffed his lines with the goal at his mercy by missing his kick and putting it wide.

Prestwich on the whole continued to have the better of the game and chances, Tito Miguel putting another chance wide when he perhaps should have scored.

At the other end Old Blacks did have a few corners but little in the way of real chances until in the 18th minute they broke down the left, played a nice overlap and the winger laid off for a forward to fire into the net from a narrow angle to take the lead.

Prestwich responded and pushed forward relentlessly but with tenacious defending and a host of missed half chances the score line remained unchanged.

That is until the 44th minute when after a rare Blacks attack Mike Hudson in goal collected an easy long ball then played his own long kick which cleared the slow turning defence and Haslam ran through, outpaced the defender and placed a nice finish into the bottom corner giving the keeper no chance for 1-1.

The whistle blew for half time with no further incident and Prestwich glad of the score line with 45 minutes to improve on it.

Steve Lorenzini changed things at half time putting Dillan White on at full back in place of a tired Sam Holden, making his first start of the season, pushing Martin Hill forward and Neary alongside Haslam in a switch to 4-4-2.

Having identified Blacks weakness in getting turned Prestwich reverted to a slightly longer ball game and this paid off almost immediately when Richard Steadman put a measured ball up to Haslam who took it neatly on to his left, glided past the defender and shot into the bottom right hand corner, helped by a little bounce over the keeper’s outstretched hand in the 49th minute.

This heralded a period of almost constant Prestwich dominance as they looked to extend their lead and while Blacks battled gamely they gave Hudson no real trouble.

Matthew Brennan who had worked tirelessly, as had Callum Pragnell alongside him in midfield, took a knock and was replaced on 55 minutes by Sam Smith which saw a period of less energy but more accurate distribution from midfield.

This culminated in another longer ball finding Neary who turned his defender, appeared to push the ball too far forward onto the advancing keeper, but he somehow got there first and clipped the ball over the keeper and into the net on 59 minutes for 3-1.

This stung Blacks into action and the Prestwich defence had some more serious defending to do but lead ably by Barrie Campbell they repulsed everything thrown at them.

On 65 minutes James Barlow replaced the excellent Stefan Rapacz at left back and continued the resolute performance of the back four.

Prestwich were still pushing forward and now getting more space to play as Blacks tried to get back into the game and following several missed chances scored the best team goal of the game.

Sam Smith played a glorious cross field pass to White who had advanced into the box, he met the ball first time and put in an inviting daisy cutting ball across the face of goal which Haslam gleefully pounced on to steer into the net for his first hat trick of the season and make the game safe in the 73rd minute.

To their credit Blacks came storming back and created some anxious moments for the Prestwich defence.

In the last 15 minutes they had a goal disallowed when Hudson was held when trying to retrieve a loose ball and shortly after while under pressure taking a high ball, it slipped from his grasp and was poked toward goal. Thankfully Campbell was there to clear the danger.

Hudson then made a smart save at his near post but these were the last serious threats to the Prestwich goal.

At the other end Sam Smith fired a 20 yarder just over near the end, which was the most noteworthy effort they could muster but with the game won it mattered very little.

With no game next week (player wedding) the next challenge on 26th October is a home game against Failsworth Dynamos at Adie Moran Park with a 2.30pm KO.