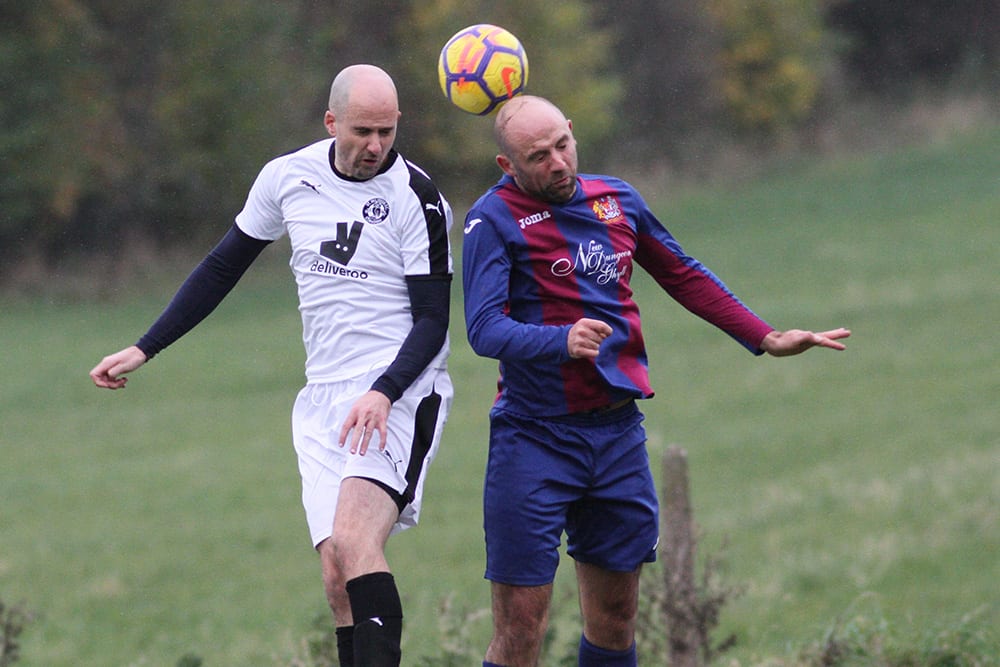 Prestwich had a bad day at Standish and as seems to be commonplace for key matches were only able to field a team with one substitute.

Nonetheless the score line perhaps flattered Standish who survived a first half Prestwich onslaught to rally in the second half and finish the better team.

The game was played on a very soft pitch which was already rutted and bobbly, but got worse cutting up as the game went on. The first half with Prestwich playing down a significant slope was played at a brisk pace with both teams trying to play passing football on the difficult surface.

Overall Prestwich had more of the early play but Standish with a few very capable players were always a threat, breaking quickly and pressuring the Prestwich rear guard but without creating a clear chance.

At the other end Prestwich huffed and puffed but lacked a clean finish to some good approach play.

The deadlock was broken in strange circumstances when Standish were awarded a penalty in the 15th minute. Steven Lorenzini was challenged by a forward in the box, Michael Hudson came off his line to claim the loose ball but Lorenzini got there first and diverted the ball away to safety but Hudson’s momentum sent him into the forward, bringing him down resulting in a very unfortunate spot kick, from which he was given no chance for 0–1.

Prestwich’s response was to push forward and over the next 25 minutes they dominated the game but still had to be alert at the back. Several good postitions were wasted and on three occasions loose balls in the box were cleared by desperate defenders with nobody able to apply a finish.

That is until the 28th minute when a through ball was not fully dealt with, falling nicely for Sean Haslam to rifle home a first time effort from the edge of the box for the equaliser.

Following this Michael Neary had a volley well saved by the keeper who repeated his heroics minutes later to save a Callum Pragnell free kick at full stretch. Another smart save followed shortly after and at this stage he was keeping Standish in the game.

Pragnell then had a header come off the bar and was cleared away. Just when it was looking inevitable that Prestwich must take the lead, Standish did. A long ball was nicely headed down by the troublesome centre forward into the path of a supporting midfield player who evaded James Barlow and from the edge of the box shaped to cross the ball. Fortunately for him he slightly mishit it with the outside of his foot and it skimmed and bent into the bottom corner for 2-1 in the 39th minute.

Prestwich finding themselves behind at half time to two quite bizarre goals when it could have been so very different.

The second half though was very different, Standish with the slope upped their game and showed more desire to win the ball and press high giving Prestwich a lot to think about.

This time it was Prestwich who were limited to breaks up field. Prestwich had brought on Pearse Connery at half time for the struggling Rafael Straszewski and changed their system to 4-3-3 but in the event this did not work as expected.

The front three of Neary, Haslam and a strangely out of sorts Martin Hill were well marshalled by the Standish defence and their essentially 5 man midfield were getting much more joy in moving forward.

Despite some excellent defensive work by Lorenzini, Richard Steadman, Barrie Campbell and Barlow the pressure was building and in the 60th minute another bizarre goal more or less clinched it for Standish.

A good overlap on the right saw the ball crossed rather tamely into the box at the near post, Hudson appeared to have it well covered but somehow allowed it to squeeze under his body and into the goal for 3–1.

Prestwich worked hard to get into the game but too often lost the ball due to unforced errors and misplaced passes resulting in clear chances being at a premium. The midfield engine room of Matthew Brennan, Pragnell and Connery were gallantly trying to stem the Standish flow and create something of their own but Prestwich were restricted to an excellent Pragnell free kick which found the keeper in exactly the right place and a couple of scrambled efforts which came to nothing.

Then as the game neared its conclusion Prestwich’s day turned even sourer when first Brennan was unlucky to be booked for what looked a perfect tackle in the 88th minute and two minutes later Steadman was harshly sent off for a tackle on the edge of the box which probable did deserve a booking.

To add insult to injury Standish got their forth with a great strike from the resulting free kick in the 91st minute giving them a comfortable, if somewhat fortunate 4–1 score line.

Even then there was time for Prestwich to scorn another good chance when a late free kick evaded the defence and Campbell ghosted in on the near side to place his header wide when he would have been expected to score.

In truth Standish deserved their win if only for the effort and energy they put into the second half but even they may be honest enough to acknowledge a half time lead was more than they could have expected on the balance of play.

Next up for Prestwich is a league game v Mostonians FC at Adie Moran Park on the 16th November with a 2.00pm KO, weather and pitch permitting.