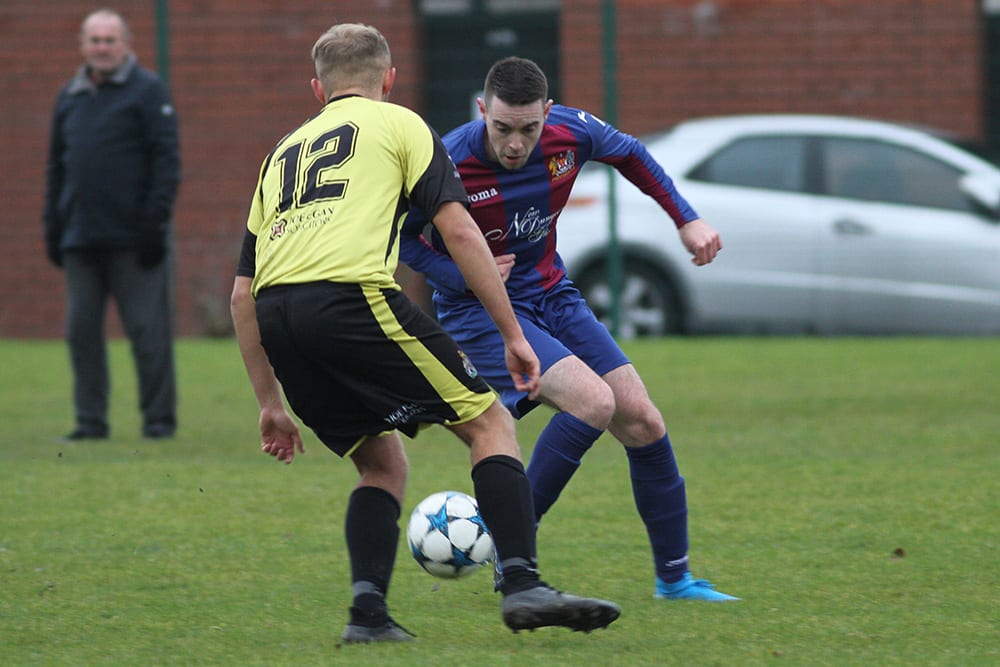 Prestwich ultimately emerged from a tricky fixture against struggling Thornleigh with a much deserved victory which in the end reflected the proportion of chances created but was only fully secured in the last 10 minutes.

Again fielding a team plus one substitute Prestwich were put under early pressure from a side badly needing a win and they started off with that intent. Prestwich having had to make four personnel and several positional changes from last week took a little while to settle but when they did they dominated the game, but not before some early setbacks.

Within the first 5 minutes they conceded several corners and Mike Hudson had to tip over a 25 yard pile driver. It was from another corner on eight minutes that Thornleigh took the lead, an in swinger from the left was poorly defended at the near post and a forward nipped in to steer the ball home.

Prestwich responded well and pressed forward putting Thornleigh under real pressure. The equaliser came on 13 minutes when from a Sean Haslam corner the ball fell loose in the box and Michael Neary rifled home despite a defender trying to save it on the line, a handball that went unpunished.

Within two minutes Thornleigh again took the lead when they were awarded what looked like a very soft penalty but which was dispatched with aplomb for 2–1.

Prestwich bounced back and Haslam had a goal disallowed for offside, Steven Lorenzini fizzed a shot from outside the box just wide and Neary had a shot charged down all before Haslam equalised when the ball evaded a couple of defenders in the box and he fired in off the far post on 21 minutes.

Prestwich were now dominating much of the possession and Thornleigh were using long balls up to a couple of lively forwards and continuing to be a threat without creating any clear cut chances.

Prestwich though were creating chances of their own and on 26 minutes took the lead they were never to lose. Tom Gibson took one of his trademark long throws from the left touchline and launched it into the six yard box where it was met by Barrie Campbell who bulleted a header into the roof of the net.

After such a hectic first quarter the rest of the half was less dramatic but Prestwich should really have extended their lead with the range of chances that were created. Haslam got in behind and played a ball across the box that nobody met, James Barlow fired in an early cross behind the defence which Martin Hill just failed to steer into the net and other efforts went wide but with little real threat developing at the other end the half concluded with Prestwich holding a narrow 3–2 lead.

The second half began as the first had ended with Prestwich largely in control of the game but still having to deal with a raft of long balls, but the back line of Gibson, Barlow, Campbell and Sam Holden (back after injury) dealt with everything and Hudson in goal had little to do but collect high balls, not having a serious save to make.

Prestwich were playing all the best football driven on by the midfield three of Lorenzini, Rafael Straszewski and Stefan Rapacz with the wide threat of Neary and Hill always a problem for the Thornleigh defence.

Haslam had a good effort go wide of the far post when he turned his man and shot across goal and Hill blazed a shot high over the bar from a good position. It came as no surprise though when Prestwich increased their lead in the 65th minute. Haslam collected a pass on the edge of the box and played a delightful little pass in behind the defence which Straszewski latched on to, skipped past a defender with great skill and steered past the onrushing keeper for 4–2 despite a valiant attempt to clear off the line.

This heralded the introduction of Chris Adams on 66 minutes who replaced a tiring Gibson at right full back, adding a bit more drive on that side with some good support play.

The game more or less settled into the pattern of Prestwich trying to find a further goal and Thornleigh holding on at the back but still pushing men forward to try and get back in the game.

That is until the last few minutes when the probing of the Prestwich forwards finally put the game to bed. Straszewski won an important tackle in midfield and popped the ball forward to Haslam who was in space, he outpaced the defender and fired the ball through the legs of the advancing keeper on 87 minutes for 5–2 and finally ended Thornleigh’s resistance and threat.

Within a minute or so in the 88th minute Neary broke through two challenges on the edge of the box to fire into the bottom corner for the sixth and complete a comprehensive and much needed victory.

Next up for Prestwich is a very tough home game against last season’s champions Whitworth Valley FC who currently lie second in the table. The game is at Adie Moran Park with a 2.00pm KO.