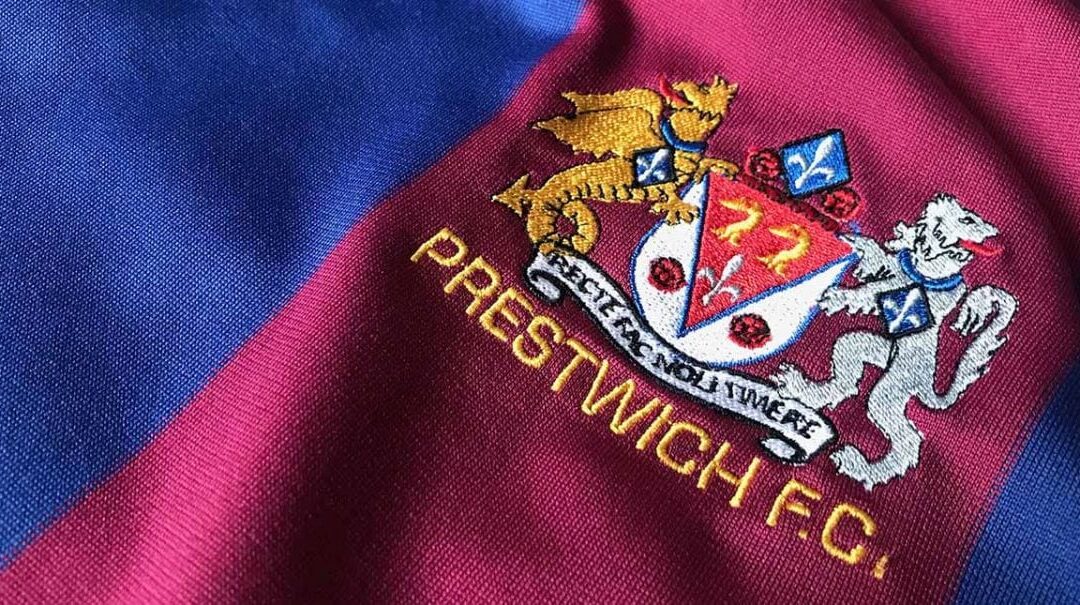 Prestwich FC ended 2019 with a rather disappointing result against a Lever side that was decidedly better and more organised than the one they played in pre-season.

The game played on an exposed 4G pitch was badly affected by a very strong gusty wind that caused difficulties for the players throughout the game.

Starting the match into the teeth of the gale Prestwich made some early inroads with some good passing play. Sean Haslam was the first to test the keeper when he was set free on the left of the box and brought a decent save in the 3rd minute. Shortly after Martin Hill fizzed a shot in from the right which was pushed away for a corner.

After this early pressure Prestwich were forced back and escaped punishment when a 30 yard free kick sailed over the bar. Unfortunately another free kick from almost exactly the same place on 10 minutes was driven low and with wind assistance powered into the bottom right hand corner of the net past the wall and Mike Hudson’s despairing dive.

With the wind more or less behind them Lever continued to put the Prestwich rear guard of Steven Lorenzini, Sam Holden, Barrie Campbell and Matthew Brennan under pressure but they coped admirably and at every opportunity Prestwich broke forward and while several half chances were created the target was missed or the keeper saved.

Much of the forward work was being driven by Callum Pragnell and Tito Miguel in midfield with Martin Hill and Michael Neary providing the wide threat. Haslam nearly bundled a Lorenzini cross in but it was cleared but little was getting through into really dangerous positions.

Further disaster struck in the 25th minute when from a driven near post corner a forward managed to evade his marker and direct the ball into the net for 2–0, ultimately a poor goal to give away.

Lever had several half chances, the best a cross shot well hit but wide of the post and others also missing the target as the wind was making it hard to keep the ball down. Any clearance from the Prestwich defence which was in the air often ended up further back than the player who kicked it. Little of serious note emerged out of the half as both sides struggled gamely to play any really controlled football.

Prestwich emerged for the second half confident that with the wind they could get back into the game, but sadly it was not to be as Lever worked tirelessly to get men behind the ball and make it difficult for Prestwich to find a way through.

For much of the half Prestwich pushed forward with Lever restricted to breaks which were few and far between until the last 15 minutes when Prestwich pushed Campbell up to try and break the deadlock.

An early second half substitution saw the struggling Rafael Straszewski replaced by James Barlow on 52 minutes which also prompted a reshuffle as Brennan switched to right back and Lorenzini pushed into a holding midfield role. This had the desired effect of creating more wide threat especially down the left with Barlow getting forward and providing some good balls into the box which unfortunately always seemed to find a defender and not a Prestwich boot.

The best chance of the half came from a Neary free kick on the left of the box which was fired in and on target only to bring an excellent save from the keeper. To their credit Prestwich worked hard but were restricted to half chances, distance shots which were often blocked by a packed Lever defence or missed the target.

On 75 minutes Brennan was replaced by Chris Adams at right back and this did result in a few breaks down the right in combination with Neary but as with everything else they produced little in the way of chances.

With the moving of Campbell up front in the later stages Lever had more chance to get forward and exploit gaps and created several chances but missed the target apart from one great save with his feet from Hudson in the 85th minute when a forward got in behind Adams looking like he must score.

The game faded out after that with Lever needing to do little and Prestwich looking like they were never going to score. The big winner on the day was the wind and the only saving grace was that it wasn’t pouring down as well.

A mention must be made about Joel Hudson who appeared as a sub for the first time this season and endured the full game on the touchline and to his eternal credit did not complain once. He just froze like the rest of us spectators.

Due to the LAL looking to revise the fixtures for the New Year it is uncertain if the next scheduled game will be away against Bolton Wyresdale on the 4th January with a 2pm KO, so please keep an eye on the website for any changes.

From all the players and staff we wish you a Merry Christmas and a Happy New Year and thank you for your support so far this season. We hope to see you next year.