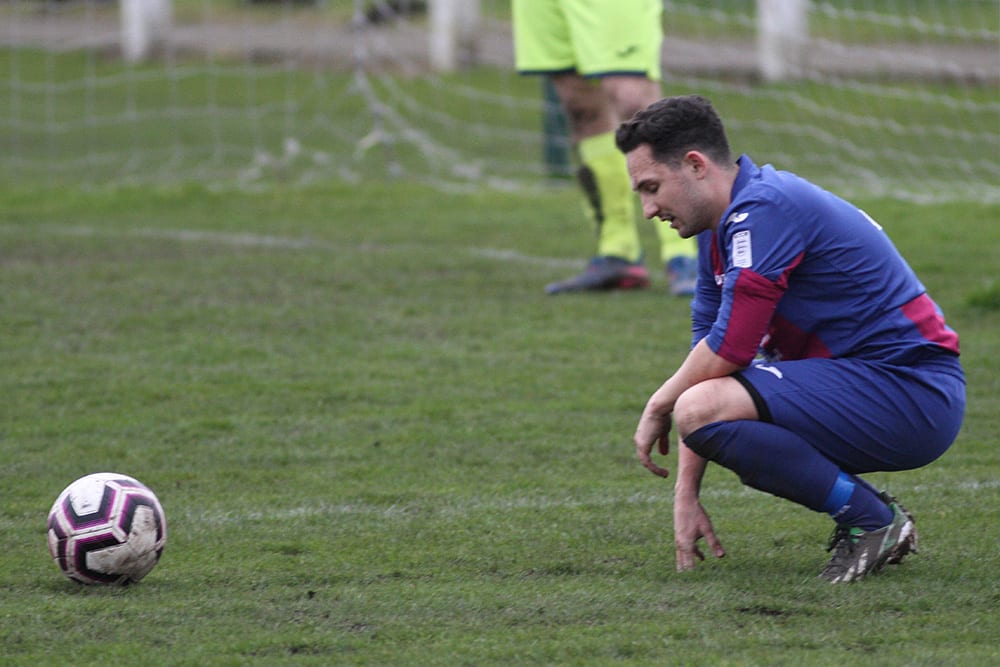 The positive vibe of being able to stage a home game turned sour on Prestwich when they were consigned to a very disappointing defeat by a very hard working and physical Valley side who on the whole exploited the windy conditions to greater effect.

With forced changes at the back due to injury Prestwich found the solidity of last week hard to replicate. Centre half Richard Steadman was forced to start in goal with none of the three signed keepers available and both Steven Lorenzini and Barrie Campbell were injured.

The defence was boosted by Chris Adams and James Barlow at full backs with Sam Holden and Stefan Rapacz at centre, the combination playing their first game as a unit and at times it showed as Valley largely playing a long ball game with quick forwards turned the Prestwich defence on many occasions.

Prestwich’s usual passing game was disrupted by a high press and quick physical challenges and they never truly got into their stride.

The midfield of Matthew Brennan, Callum Pragnell, Michael Neary and the returning Tito Miguel worked hard to establish a measure of control but often the final pass did not find the player it was meant for.

With Sean Haslam and Martin Hill working hard to create some openings the effort of the whole team has to be commended but on the day nothing came off for them.

Valley created the first half chances but without reward. Their best efforts forced a save with his legs by Steadman when a player got in one on one, and a header from 12 yards that came down off the bar and Steadman forced it to safety.

At the other end Prestwich were making little inroad on the Valley defence and a few off target or straight at the keeper shots were all they could muster. Haslam was caught offside several times when getting in behind the defence, at least two of which looked very dubious and then had an in swinging corner clutched at full stretch by the keeper before crossing the line.

Disaster struck in the 36th minute when another Valley attack caused problems for the defence and a poor clearance fell to the right winger who got to the goal line and pulled back for a player to sweep the ball into the far corner.

Prestwich had been playing with the wind advantage but had failed to force a significant save from the keeper which has to in part be credited to some very effective if not pretty defending in front of him.

The second half started with Prestwich showing much more intent and within seconds Pragnell had a shot saved going into the top corner. Minutes later a break down the right by Hill resulted in a great cross into the box which Haslam perhaps should have scored from but couldn’t get a proper contact on.

Valley always posed a threat with the wind assisting their longer ball game and they continued to get in behind the Prestwich defence. Pragnell had a shot from the edge of the box go just too high and several scambles in the box were hacked clear before Prestwich could get the reward their efforts perhaps deserved.

Steadman came to the rescue on a couple of occasions making a double save following a corner and then saving another one on one with his legs when a forward got clear of the Prestwich defence.

As Prestwich upped the pressure to get an equaliser Pearse Connery replaced Barlow on 65 minutes and Rafael Straszewski replaced Adams on 74 minutes with Holden pushed forward to give some aerial threat, forcing 2 personnel changes at the back.

Haslam did have a goal disallowed for offside when he got in and chipped the keeper with a quality finish and pushing Holden forward nearly paid off as he got to a header in front of the keeper, followed it up and his goalbound shot was cleared off the line. He then had a header from a Rapacz corner deflected onto the bar before being hacked clear.

With every effort blocked and every cross into the box finding defenders it fast became clear this was not going to be Prestwich’s day. This was underlined in the 88th minute when Pragnell, now at centre half tripped a forward in the box and the resulting penalty beat Steadman for a two goal lead.

Prestwich continued to push forward trying to grab a consolation goal but it was never to happen. Over the game too many passes were in the air and with Valley defenders winning the vast majority of headers possession was all too easily given up.

Better ball retension and more accurate passing is something Prestwich need to work on as they are a team that can move the ball well but did not really do so today. Some credit must go to Valley who proved to be a difficult team to play against with their work rate and high press which knocked Prestwich out of their normal passing game for large chunks of the game.

Overall a disappointing result that sees Prestwich third from bottom as other results also went against them. Ironically a win would have seen them in 7th place and poised to catch all but the 2 front runners.

Next up is another home game, weather permitting, v Old Boltonians FC on 25/01/2020 with a 2.00pm KO. Bolts at present head the division so a very tough game is in prospect. We hope to see you there to support the team.