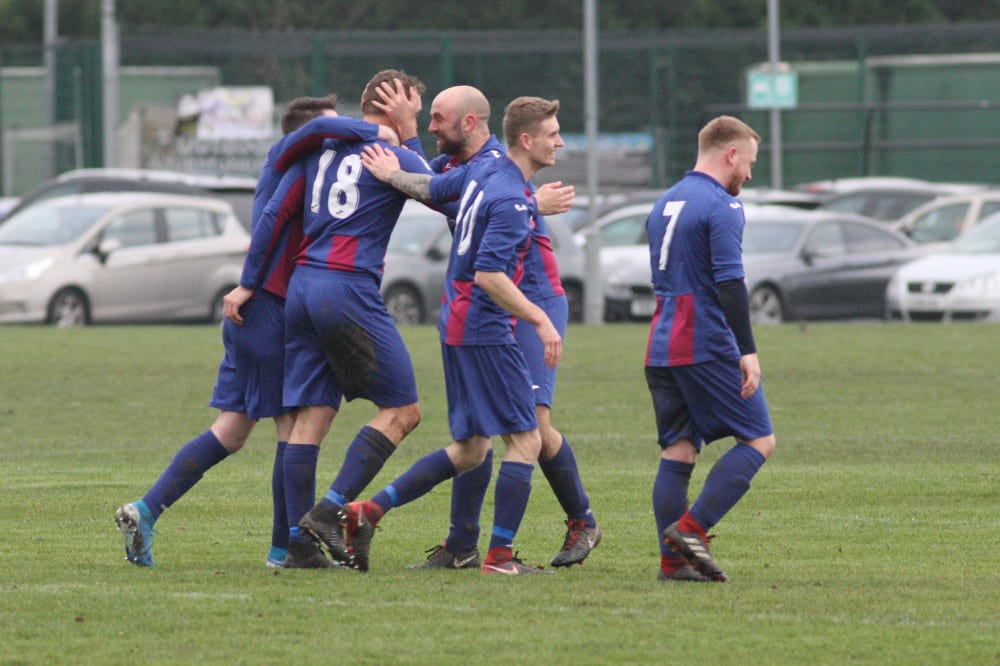 Having been denied the use of Adie Moran Park due to pitch concerns Prestwich moved this game and made a return to Hopwood Hall to ensure the game went ahead.

The move was fully vindicated by the ensuing result but was even more pleasing because of the superb performance by the team against the current leaders of the Premier Division.

Prestwich welcomed back Joe Kosub for his first game in nearly 6 years, filling in at centre half and putting in an impressive performance after such a long lay off. Michael Hudson was back in goal, also back were Steven Lorenzini and Tom Gibson at full back with Richard Steadman taking his usual place at centre half after his goalkeeping exploits last time out.

The game started with Bolts on the front foot from the off, trying to make inroads and putting the defence under intense pressure. They had a series of corners which always posed a threat due to their overall height advantage and much of the first 20 minutes was played in the Prestwich half but due to great organisation throughout the team Prestwich defended everything thrown at them and Bolts were restricted to half chances and crosses.

Their best chance was from a corner which was flicked on and met at the far post but the shot went high over the bar.

Despite their overall ascendency Bolts were vulnerable to the fast breaks that Prestwich had with Michael Neary, Tito Miguel and Sean Haslam all testing the back line for pace. Miguel fired over from a narrow angle and from a Haslam free kick Sam Holden brought a tidy save from the keeper with his headed effort.

The game ebbed and flowed with the Bolts team anxious to continue their good run of form but Hudson did not have a serious save to make during the half and it was clear that this was frustrating the Bolts team given they did have the better of the first half.

Credit for the blank score line at half time must be given to the tireless performances of Callum Pragnell and Matthew Brennan in midfield who broke up many Bolts attacks and prompted the hard working Prestwich forwards to attack when possible.

The second half started well for Prestwich who upped their forward game, Haslam and Holden putting more pressure on the Bolts defence with Neary and Miguel getting down the flanks to cause them problems.

The payoff came on 48 minutes when an accurate forward pass from Joe Kosub was flicked on by Haslam into the path of the advancing Holden who outpaced the defender and produced a delightful chip over the onrushing keeper to give Prestwich the lead.

Bolts responded immediately and went in search of an equaliser, but again the Prestwich rear guard stood firm and resolute in the face of their onslaught.

However it nearly cost Bolts as Holden almost repeated his goal on 54 minutes when he again broke free after both Haslam and the defender missed a long clearance but this time he sliced his shot wide of the advancing keeper and the post.

At the other end Hudson clawed away a bouncing ball after a corner and from another, a goal bound header was deflected over the bar by a defender. Hudson had a couple of shots straight at him and efforts were sent high and wide but despite their pressure Bolts could not break Prestwich down.

In fact it was Prestwich who were unlucky not to extend their lead when Miguel got free down the left and produced a quality cross into the box which Holden met with a diving header, bringing a brilliant save low down from the keeper, turning it away for a corner.

Bolts kept plugging away to draw level with Prestwich always looking capable of extending their lead, but still having to deal with a lot of pressure at the back which they did very effectively restricting Bolts to very few chances and nothing clear cut.

Then as the game neared its conclusion a mistake by a Bolts defender in the 87th minute saw the ball run lose in midfield, Neary pounced on it and drove for goal leaving defenders in his wake and as the keeper closed him down he calmly steered the ball into the bottom corner to give Prestwich the two goal cushion their efforts fully deserved.

Bolts continued to push forward to get back into the game and with 5 or 6 minutes of additional time played, it was another testing time for the Prestwich defence which they withstood without any serious threat of caving in.

This was a massive three points for Prestwich who are still in the bottom half of the league but if this performance can be replicated week after week the top half beckons.

To a man the players put in a tremendous amount of effort to nullify perhaps the best team in the league and deserved every bit of praise that was given them.

Special mention must be made of Rafael Straszewski and Pearse Connery who sat on the bench all afternoon without getting on the pitch, and they did so with no hint of complaint, knowing it was very difficult for the manager to change anything on the day. Hopefully they will both get their opportunity in the weeks to come.

Next up is a return to Hopwood Hall to play an away game against Chaddertonians FC on 1st February with a 2.00pm KO.