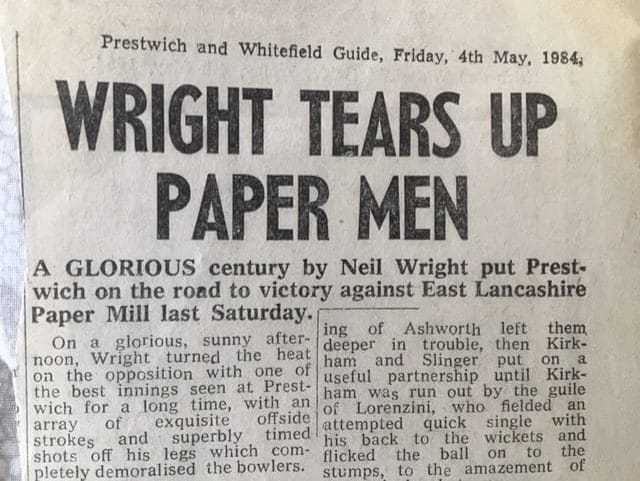 The first team were today set to host Moorside – another GMCL Premier Division newcomer. However, it would have been the renewal of an old acquaintance as the sides have met before – back in the 1970s when they were in the same league.

The 2nd XI would have faced a familiar foe today with a trip to Thornham – except they would have been playing their first team!

Sunday would have seen the 1st XI travel to Bootle in the Lancashire Cup. Again, this journey has been trod before, back in 1984, when Prestwich were bowled out for 135 (Brian Lorenzini 58) but lost by 7 wickets, with Dave Newton taking two of the wickets to fall.

Keeping the 1984 theme, we have delved back into the archives to find a Prestwich and Whitefield Guide report from May of that year recording a 17-run victory.

The report is as follows, with the headline cutting shown above:

“A glorious century by Neil Wright put Prestwich on the road to victory against East Lancashire Paper Mill last Saturday.

On a glorious sunny afternoon, Wright turned the heat on the opposition with one of the best innings seen at Prestwich for a long time, with an array of exquisite offside strokes and superbly timed shots off his legs which completely demoralised the bowlers.

But having been set a target of 209, East Lancs batted spiritedly to fall only 17 runs short of their objective.

Daly captured the early wicket of Tim Orrell but with Ken Morgan’s stubborn resistance, Neil Wright took to the stage and played the main role with 11 fours and 3 sixes, with Morgan contributing a valuable 23.

Wright was eventually dismissed for a magnificent 101 after surviving one chance while he was in his forties.

Lorenzini’s knock of 31 ended when he was caught off Slinger, who had pinned the batsmen down admirably and Lewis and Wilcock were undefeated at the close.

A string of well-judged catches thwarted the efforts of the East Lancs batsmen at the opening of their innings with Andy Taylor taking a fine catch off Bill Blackman to dismiss Darcy early on, but Moore was despatching wayward deliveries to good effect till at 42 he gave a catch to Tim Orrell, making up for an earlier blunder.

Savage looked menacing until he drove uppishly through extra cover and was snapped up by Steve Orrell. The onus was now on East Lancs with the score on 106 for 4, and the swift hands of Lorenzini with a smart stumping of Ashworth left them deeper in trouble, then Kirkham and Slinger put on a useful partnership until Kirkham was run out by the guile of Lorenzini, who fielded an attempted quick single with his back to the wickets and flicked the ball onto the stumps, to the amazement of the unlucky batsman.

The late order batsmen were dismissed with the aid of two fine catches at mid-on by Tim Orrell and another stumping by Lorenzini gave Prestwich the points. Harry Lewis, not withstanding ‘no balls’, took four wickets.” 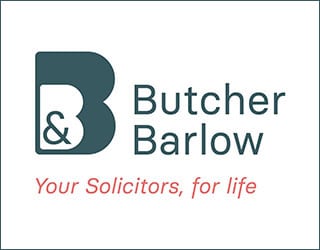