HOW THE BOWLS SECTION GOT UP AND RUNNING 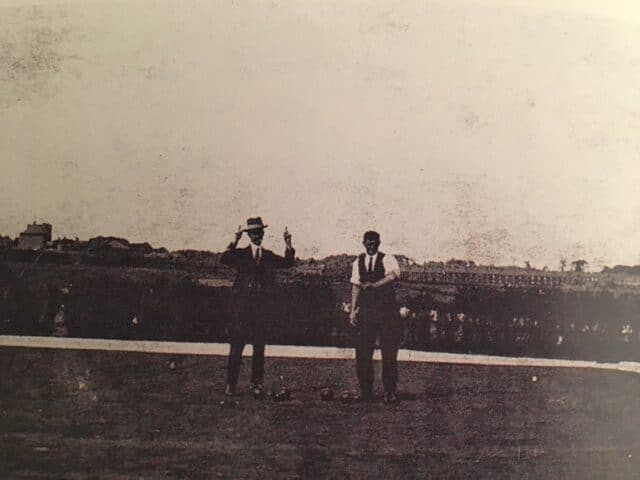 Today, we are looking back on the origins of the club’s bowling section.

The green formally opened on August 4th, 1914, the day World War One broke out. The ceremony was performed by Mr Fred Kershaw, the founder of the green, and Rev Cooper, from St Mary’s Parish, who came to lay the last sod of turf.

Here’s a few historical extracts (taken from the section’s 100th anniversary programme) detailing how the section started to establish itself during those extremely difficult years when the war took its toll on the whole club.
The photograph (right) was taken in 1914 before any houses were built on Heys Road and surrounding areas, although the outline of some big houses on Glebelands Road can just about be seen in the background.

* The club’s executive committee granted the purchase of 12 sets of woods costing 12 shillings per set, 6 jacks at a half crown each, and 10 rubber footers at a shilling each.
* Treatment of the green consisted of 5 cwt of Carters worm killer and tons if riverbed sands with a winter dressing of lime.
* The club was saddled with debt during the war but a grand bazaar was held in the clubhouse which yielded the amazing amount of £820.
* The first friendly internal bowls competition was held on 18th June 1915 – followed by a handicap in September of the same year. It cost a shilling to enter and the first prize was a set of silver carvers.
* The first friendly match against another club is recorded as being held during June 1916 against St Margaret’s and prizes were presented by Councillor Walkden.
* By the end of 1917, 65 members from all three sections of the club were serving in the forces, which meant the 1st and 2nd XI cricket teams were missing nearly all their players and the tennis section was much depleted. As a result, many women took up positions on the club committee.
* A total of 17 club members lost their lives in the war, and their names are remembered on the War Memorial roll of honour in the foyer of the clubhouse.
* It was not until 1922 that the club paved the way to play league matches by registering with the Lancashire County Amateur Bowling Association. Teams they could now face were: Holmes Terry and Co, Prestwich Liberal Club, Cheetham, Broughton, Prestwich Conservative Club, Church Institute, Glossop Cricket and Bowling Club, Alexander Park, and Whitefield Conservative Club.

TOMORROW: Read what happened when a proposal was tabled in the 1920s for ladies to be allowed to bowl.