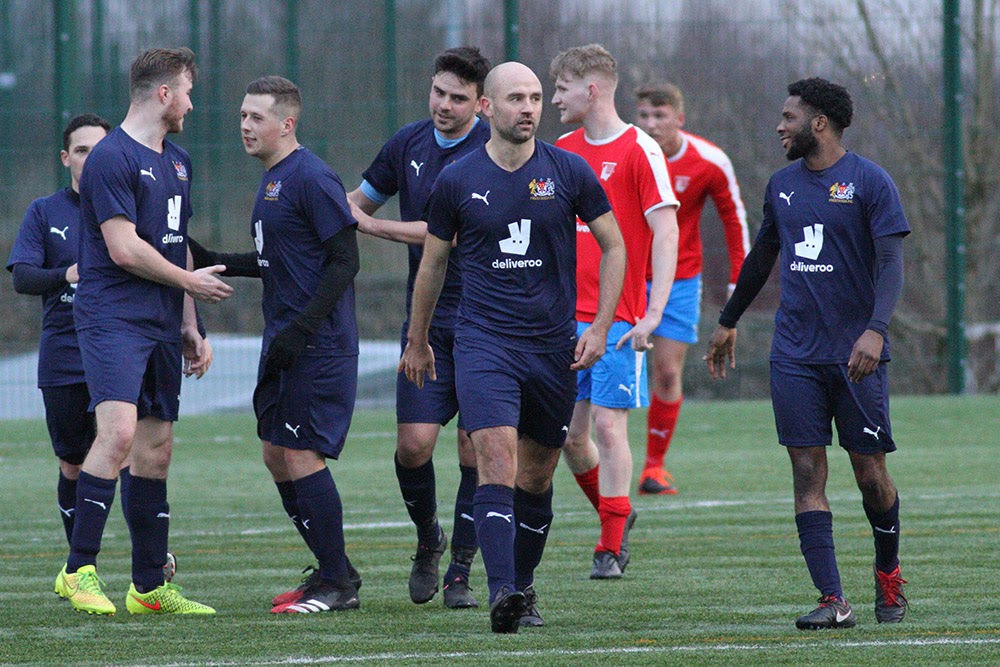 Following on from the last report Prestwich went to face their nemesis team Failsworth Dynamos on 31st October.

We have not taken a point off them since early in the 2014/15 season when we won at their ground 6–1. They have made us suffer for this ever since and this year was no different, once again falling to a late winner.

Failsworth took the lead in the 35th minute with an untidy goal after a scramble in the box and held this at half time. Prestwich mounted a second half comeback and took the lead in the 72nd minute following a 55th minute equalizer from the penalty spot by Tito Miguel and a Matthew Brennen drive from the edge of the box into the bottom corner.

Alas this was not to last and after a cross was allowed into the box Failsworth equalized with a looped header over keeper Alex Blake in the 79th minute. The bitter pill came in the 83rd minute when a hotly contested goal was scored from close range with all Prestwich’s defenders claiming an offside that was not given. This 3–2 score line continued our pattern of win at home lose away so far this season.

Then came the lockdown and no game for a month.

The resumption of play saw Prestwich host old foes Old Boltonians, another team that often get the better of us, but not this time.

After a combative first half that saw plenty of chances for both sides but no goals Boltonians took the lead on 60 minutes with a well taken goal from a tight angle in a phase of the game when Prestwich were broadly on top. However, they continued to work hard and pressed for an equalizer which for a while looked like it would not happen as chances again went begging. Then up popped Sam Holden running onto a chipped pass to beat keeper and a defender to the ball and give himself an easy shot into an empty net in the 83rd minute.

More joy was to follow 2 minutes later when Richard Steadman rose highest to head home a Sean Haslam corner for 2–1. Despite their late desperate efforts Boltonians could not force an equalizer and in fact Holden missed a great opportunity to make the game safe by blazing over from a great position.

The 100% home record was therefore further extended to five games.

Next up was Chaddertonians away and the pattern continued but how Prestwich lost this game is difficult to explain beyond a raft of missed chances and some poor defending.

Prestwich took the lead on 8 minutes with a fine individual goal from new man Milkiya Ghebremariam who skipped past two defenders to fire into the far corner. This was the score at half time but Prestwich’s tendency to concede goals in the first 20 minutes of the second half struck again when a cross was prodded home on 57 minutes.

Things got worse four minutes later when a move down the right was not tracked and Chads took the lead with a well taken goal. Back came Prestwich and after substitute Callum Pragnell was felled in the box up stepped Michael Neary to score from the spot on 75 minutes to equalise.

Both sides went for a winner and missed chances but then in the 89th minute Prestwich conceded a totally unnecessary penalty when a player was fouled by the goal line and going nowhere. This was duly dispatched, but Prestwich still had a chance to level things when the ball fell to Ghebremariam eight yards from goal, but he was only able to fire wide so thus ended a 4th consecutive away defeat. But Prestwich were still top of the division.

The last game of the year saw Prestwich travel to play Little Lever. Missing a few regular players Prestwich put in a pattern changing performance that ultimately kept them top of the division for Xmas and into the New Year.

The game was played in windy conditions with Prestwich against the elements in the first period, but it could not have started better. After good early pressure Prestwich took the lead in the 2nd minute when Martin Hill delivered a superb cross into the box and Milkiya Ghebremariam was on hand to force the ball home.

Lever responded with a series of long balls which typified their tactics throughout the game, but it paid off in the 11th minute when a ball was flicked on and found a player free in the box who fired a volley in for the equalizer.

The game was evenly balanced, but Prestwich were playing the better football and creating the better chances. They were rewarded in the 30th minute following a period of pressure when the ball fell to Rafael Straszewski on the edge of the box and he fired in a great half volley into the bottom corner.

The lead was extended in the 41st minute after a good move which saw Martin Hill latch onto a good ball in behind the defence to fire in the third goal and give Prestwich some breathing space and a half time 3–1 lead.

With the wind in the second half Prestwich were unable to add to their lead despite some useful chances, but with the new look defence playing superbly they dealt with everything Lever could muster and Michael Hudson in goal did not have a serious save to make.

This was the first away win of the league season and hopefully it will not be too long before another follows.

Currently there are no more fixtures issued by the LAL, but they are planning to schedule games for the 9th January so please check the website for news of these, Covid 19 and weather permitting.

Photos from the Little Lever game: